Timing belts are a BIG deal. 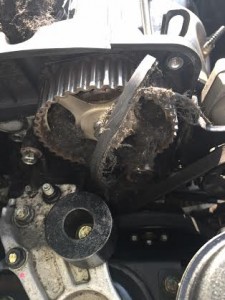 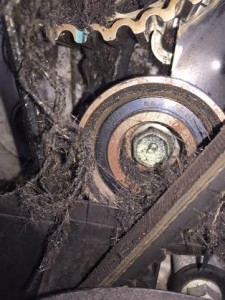 The rubber/fabric has shredded and gummed up the engine

For the motorheads (whom we adore!):  A timing belt synchronizes the rotation of the crankshaft and the camshaft(s) so that the engine’s valves open and close at the proper times during each cylinder’s intake and exhaust strokes.

What that means to people who don’t know much about cars (like the writer of this blog) is if your timing belt breaks or doesn’t work, your car won’t run or move.  Because it’s on the inside of your engine, you won’t KNOW that it’s time to change, so you absolutely must rely on your manufacturer’s recommendation (based on mileage) to change it.

This car is a 2010 Hyundai…. or should I say ‘was?’  The timing belt was JUST changed a month ago.  According to what we can see, the belt was put on improperly (perhaps too loosely, or too tightly), and it literally shredded.  This engine is completely ruined.